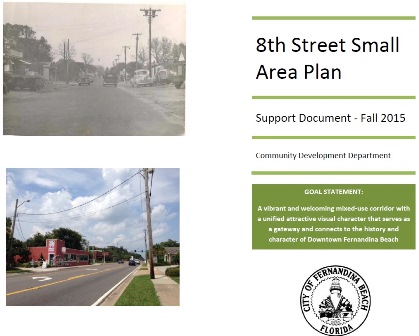 To create a vibrant and welcoming mixed-use corridor with unified attractive visual character that serves as a gateway and connects to the history and character of Downtown Fernandina Beach.

The South 8th Street Corridor serves as the primary entry onto Amelia Island from the Shave Bridge and into the City of Fernandina Beach and historic downtown. Historically, this corridor evolved as an extension of downtown, and served as the first auto-centric commercial corridor in Fernandina Beach. Gas stations and automobile dealers located on S. 8th Street in the mid-20th century.

As time went on, more commercial development appeared on S. 8th Street and restaurants, retail, banks, and other businesses developed along the corridor. When Fernandina Beach continued to expand with new shopping centers on 14th and Sadler Roads, and businesses also began moving to the growing Yulee area, S. 8th Street entered a period of decline. Properties have sat vacant for years, businesses have come and gone, and the general appearance of the streetscape has deteriorated.

Improvements to the 8th Street corridor in the City began decades ago, but it was not until 2004 that the City started a concerted effort to help improve the area. This explored the concept of an overlay district with design criteria, as well as increased code enforcement and roadway improvements and coordination with FDOT. However, this project stalled and no further efforts were initiated.

Despite the lack of a coordinated effort, improvements to 8th Street have taken place over the past several years. The proximity to historic downtown and the benefits of being in an urbanized area served by infrastructure make the area attractive for rehabilitation. It is the hope that this effort's associated changes to the Comprehensive Plan and Land Development Code will help further revitalize the area and provide better opportunities for reuse and redevelopment of property, while maintaining the character of Fernandina Beach. 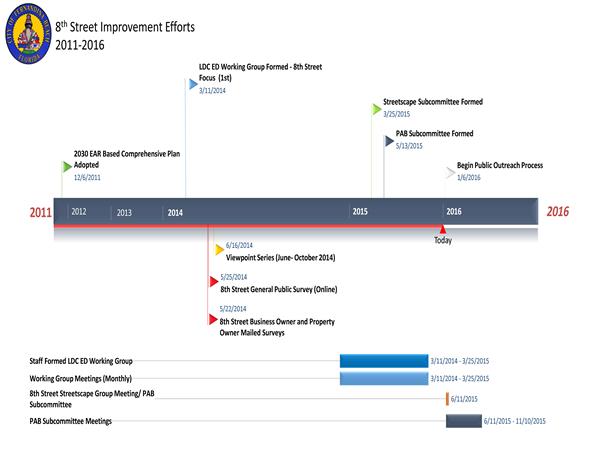 The City’s current effort stems from direction in its Comprehensive Plan (Guide for Growth and Development in the City) which was most recently adopted in late 2011. In early 2014, planning staff organized a working group to consider potential policies and land use mechanisms to foster and support redevelopment directives. This group assisted staff with evaluating options and chose to focus initial efforts on the 8th Street corridor.

Members of the group included an architect, engineer, the County Economic Development Board director, a citizen-at-large, Planning Advisory Board members, and a representative from the County planning department. All meetings were noticed and open to the public, and minutes were taken. . All input was welcomed. The group met monthly from March 2014 through March 2015. Stakeholders from particular fields or interest groups related to 8th Street and the area were invited to meet with the working group.

The group immediately identified several challenges to reinvestment in 8th Street: 1) the current zoning that includes a mix of C-1 (Neighborhood Commercial), C-2 (General Commercial), C-3 (Central Business District), and MU-1 (Mixed Use) from 7th Street to 9th Street, 2) the lack of residential zoning on 8th Street specifically in the C-2 General Commercial zoning district, and 3) the varying jurisdictions along 8th Street (city and county properties and Florida Department of Transportation ownership of the roadway). Additional challenges were identified by members of the group and can be reviewed in greater detail within the 8th Street Small Area Plan Opens a New Window. .

Members of the working group also published viewpoints in the local media Opens a New Window. as a means to generate interest in the group, share thoughts and ideas, and invite members of the public to participate. These editorial pieces expressed the opinion on 8th Street revitalization from each of the authors’ unique perspective. Five viewpoints were shared: Phil Griffin, Robin Lentz, Jose Miranda and Nick Gillette, Steve Rieck, and Planning Staff.

After a year of meeting, the working group decided to issue its recommendations to the Planning Advisory Board (PAB). The PAB formed a subcommittee and have been working towards a strategy which combines a new land use designation and zoning district along with development standards for the 8th Street small area, and large-scale land use and zoning map amendments. PAB subcommittee meetings have been regularly held between May 2015 and November 2015.

For meeting minutes, agendas, and information pertaining to both the working group and the PAB subcommittee. 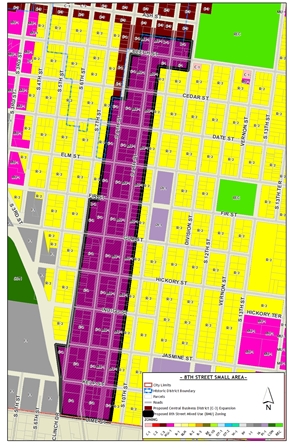 The PAB Subcommittee and Staff are working on one piece of the 8th Street puzzle at this time which includes a new land use and zoning category, design standards for the new zoning, and map changes. Click here for specific details on the land use and zoning proposed Opens a New Window. . Here is a larger map of the 8th Street Small Area Opens a New Window. .

Design requirements tied to the new 8th Street Small Area Mixed Use (8MU) land use category and MU-8 zoning designation have been drafted to reflect a goal of becoming more Centre Street like by providing an opportunity for residential development mixed with commercial development opportunities. It is intended to provide for a wide-range of housing options with access to amenities located downtown. The zoning changes have been crafted to accommodate existing uses along 8th Street and anticipate future uses for the area. It is unlikely that the City will experience immediate change resulting from the new land use and zoning within the area. Changes will occur over time.

On January 6, 2016, the Planning Advisory Board Subcommittee and original Working Group met meet to discuss the draft language proposed and our next steps for community involvement. Click here for a presentation Opens a New Window. was made by City planning staff at the meeting. If you're viewing from a mobile device, please use this PDF link Opens a New Window. instead to view the presentation.

There are several ways you can get involved and provide us with your feedback, comments, questions, or concerns about the proposed changes for 8th Street. We have several outreach opportunities in February.

We look forward to hearing from you!